A dipstick diagnosis of Dial 1091, a dedicated helpline for women run by the Haryana Police, revealed domestic violence as the most prevalent issue women call help for in the state. Crimes like molestation and stalking follow next. The annual National Crime Records Bureau (NCRB) report for 2018 suggests that on average 39 crimes against women were reported each day, but more were committed in Haryana.

How can Haryana be made safe for women? But first, what do we mean by women safety?

Feeling safe manifests from safe spaces and people. The first includes improving infrastructure and services, like providing for women-only buses or features like panic buttons for safe transport. It could also entail fixing streetlights, installing CCTV cameras and intensive patrolling in crime-prone areas. Such interventions are already being carried out by the police, Urban Local Bodies and Department of Transport. It is the second aspect related to people, i.e., changing human behavior and social norms that isn’t straightforward.

Since July 2019, Chief Minister’s Good Governance Associates (CMGGAs), deployed in the 22 districts of Haryana to help implement the Chief Minister’s key priorities, have pursued 30+ district level initiatives, including proactive and reactive measures, to make physical spaces outside of homes safe and to change mindset and behavior of government stakeholders and citizenry.

In Rohtak, Gulabi Autos were rolled out which proactively promoted women drivers for public transport. The CMGGA has set up a system to identify potential female drivers, facilitate bank loans to purchase autos and coordinate across driver’s training and license issuing authorities. Over 30 women have benefitted from this initiative, which is now being scaled up to two other districts.

Reactive measures like establishment of Prevention of Sexual Harassment (POSH) committees in workplaces and One Stop Centres (OSC) ensure that women in distress have easily accessible avenues to redress their grievances.

In Yamunanagar, a series of orientation workshops later, POSH committees were either formed or reinstated in the district secretariat and departments. The Sexual Harassment of Women at Workplaces (Prevention, Prohibition and Redressal) Act, 2013 is a legislative act in India mandating every workplace to have POSH committees to protect women from sexual harassment.

In every district in Haryana, CMGGAs have acted as catalysts in establishing and operationalizing OSCs, popularly called as Sakhi Kendras. An OSC is a centrally-sponsored scheme under Nirbhaya Fund to provide shelter, legal, medical and counselling services for victims of violence. All OSCs in 22 districts of Haryana have started operating 24*7, are managing digitized case logs with more than 90% facilities in place. Between August 2019 and May 2020, when these reforms were initiated, the footfall in OSCs has more than doubled. During the COVID lockdown, OSCs proved to be a haven for women when cases of domestic violence in this period surged to over 1,000. CMGGAs continue to work on recruiting specialized staff and providing professional counselling services in these centres.

While implementing schemes which strengthened existing services for women’s safety, the need for behavioural change proved complementary and was inevitable.

In six districts, police officers who deal with women in distress frequently–those who manage Dial 1091 or are deployed in the Durga Shakti Rapid Action Force and Mahila Thana, underwent workshops to manage such cases with sensitivity. Given its efficacy and importance, this initiative will be scaled to other districts as well.

Gender sensitization aimed at bringing about behavioral change in citizenry is also the most critical to ensure women’s safety. One way to bring about a positive It was realized that change in public behaviour is through a sustained mass campaign, driven by the state leadership. 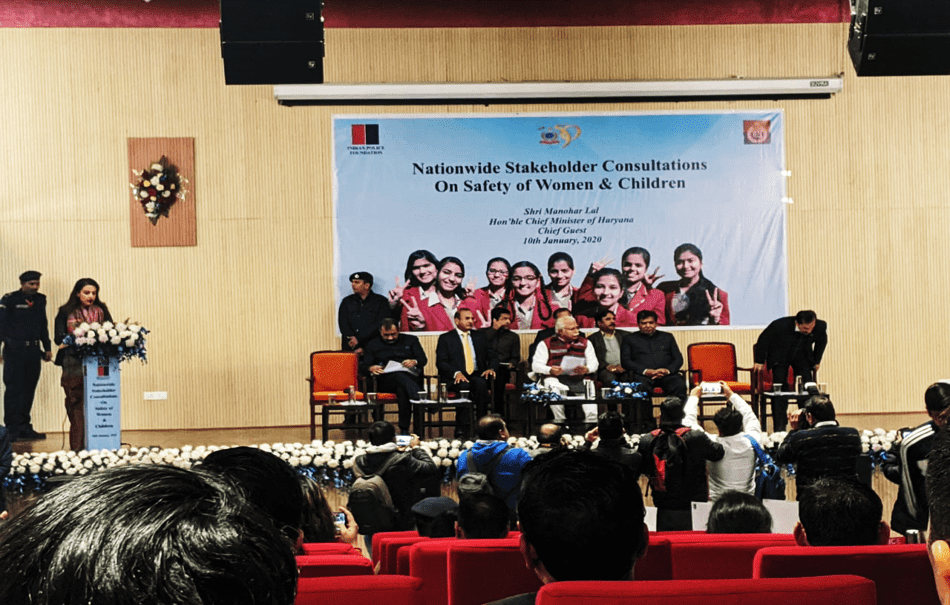 To this end, CMGGAs have designed and conducted innovative mini-campaigns which can become proof of concepts for a mega campaign at the state level.

In Ambala and Panchkula, Mahila Sammelan and Khula Darbar were conducted to spread awareness among 100+ women sarpanches to facilitate panchayat-level discussions on women’s safety.

In Jhajjar and Rohtak, CMGGAs brought on board experts to conduct workshops on gender roles, patriarchy, and tackling gender discrimination in 100+ schools as a pilot under the Jaagriti initiative.

Across the state, 10000+ bus drivers and conductors underwent a 2-hour gender sensitization workshop and pledged to be safety ambassadors for women.

The diagnosis, design, and pilots of women’s safety initiatives by CMGGAs has given the state government insight into what it would take to address a complex governance problem embedded in social realities.