State Public Works Departments (SPWDs) are an essential, if often ignored, cog in the governance machinery of the country. As the departments in charge of creating and maintaining critical infrastructure like public roads and buildings, SPWDs play a critical role in ensuring that other departments like education, health and tourism can effectively provide their services to citizens. An improvement in the efficiency of SPWD administration saves taxpayer money, which can then be diverted to other resource-starved departments. Equally importantly, effective provisioning of high-quality infrastructure improves the quality of life of citizens and plays a critical role in economic development.

Last year, the Odisha Works Department (OWD) gave Samagra the mandate to design an approach for transforming the department in line with the Odisha Chief Minister’s 5T (Technology, Teamwork, Transparency, Time, Transformation) framework for improving governance in the state. Broadly, this meant breaking down the mandate into three objectives: to improve timeliness, reduce costs and improve citizen satisfaction with OWD projects. What followed was four months of intense diagnosis and solutioning.

The smallest ‘work’ that the works department engages in is the ‘project’, and the team started by understanding and diagnosing the project execution value chain. The project execution value chain starts from the stage of project selection, where a decision is made on which projects shall be executed in a particular year. Our diagnosis concentrated on understanding whether the right kind of projects are being selected and prioritized. The second step in the value chain is project financing. There are multiple routes to financing an infrastructure project (government grant, PPP, infrastructure bonds, etc.) and the idea here was to see if improvements could be made in the way projects were being financed. Understanding the way projects are designed, and the various clearances that were required for successfully executing a project was the third step in the value chain that we diagnosed.

This was a very critical component, given that project costs and timelines are determined at this stage of the project. We approached tendering, the next step in the value chain, from the lens of ensuring competition in project tenders (all work undertaken by OWD is done by private contractors), and towards that end, diagnosed the ease (or the lack thereof) that the contractors experienced when working with OWD. This also involved analysis comparing OWD’s bid documents against national and international benchmarks to see if the terms and conditions in the bid were appropriate. Diagnosing the construction process was a critical component of our work, especially given that time and cost overruns in the construction stage is a problem that has plagued the Indian infrastructure sector. The final component of the value chain, maintenance, was one of the most critical to understand for two reasons. Firstly, good maintenance process and practices prolonged the life of infrastructure, hence reducing the costs incurred. Secondly, maintenance was one of the few citizen-facing avenues of OWD where citizens could directly interact with OWD officials.

Parallely, the team also focussed on the enablers that were required for a project to be executed successfully. The first, was the organizational component - the organization structure of OWD, the HR policies and practices it used, and the governance mechanisms that were in place for successfully executing projects.

The second enabler the team focussed on was the technology and data systems being used by the department. How good and well-utilized was the project tracking portal where the department officials could get to know the status of projects? How up to date was the asset management system, which could help OWD in project selection and identification of infrastructure requiring maintenance? Finally, how user-friendly were the contractor-facing websites--the one stop point for any contractor interested to work with OWD? 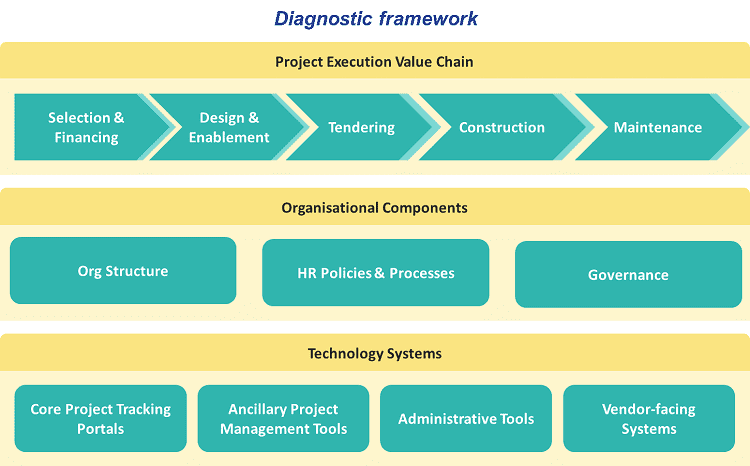 The diagnosis of OWD involved multiple rounds of stakeholder interactions, district visits, data collation, data analysis, and primary and secondary research. Simultaneously, the team also shared the findings of the diagnosis with the Secretary, OWD to highlight what was working well and what was not, so that corrective action could be taken as soon as possible. With this in mind, the first draft of the solution framework was presented to the department. Six improvement themes were identified for the department to focus on, and on the Secretary’s request, the team also prioritized 7 initiatives in which implementation support was provided to OWD.

Here is one example of how the team went from diagnosis to design to recommending reforms.

Q: How easy can it be to reduce cost overruns in a significant number of projects?

The team’s final recommendation for reducing cost-overruns incorporated all the three options mentioned in the question above, in addition to a few more. However, the answer to the question is: Very easy - release a government order.

Diagnosis revealed that a substantial number of projects are delayed due to issues in pre-construction clearances. Road construction projects, for example, require trees to be cut, electricity poles and water supply lines to be relocated, and where necessary, private land to be acquired. The power to provide clearances for these activities are not with OWD - multiple departments like revenue, forest, electricity etc. are involved. If any of these departments delay clearances, the project gets stalled. Our diagnosis also revealed that in many cases delays during the construction phase are not caused by the contractor. Faulty design blueprints, bureaucratic red-tape within OWD or even unexpected weather phenomena could force the work to stop. In both these cases, the cost of the project increases due to the increase in price of raw materials and compensation that is to be owed to the contractor.

To fix this problem, the team decided to change the policy governing the approvals process: the team recommended that onboarding of the contractor be initiated only when there is complete certainty that the pre-construction clearances would be provided within 90 days. This was to be ensured by adding another approvals layer from the Chief Engineer into the existing approvals process.

This is the existing approvals process: 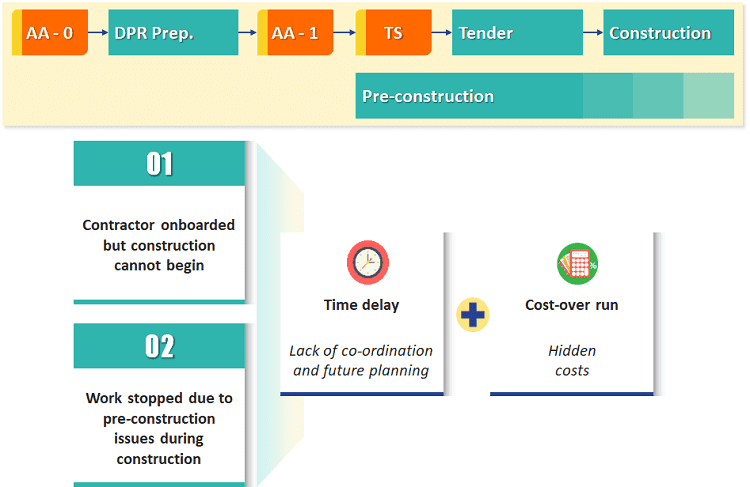 This is the recommended approvals process: 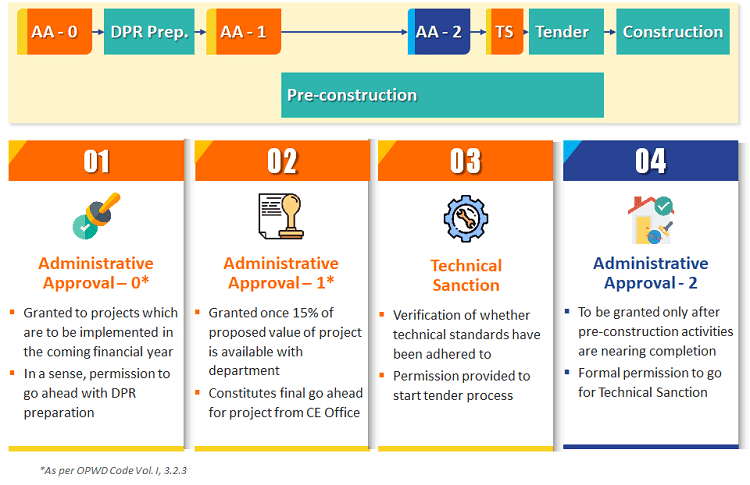 Over a period of 4 months, the team completed its diagnosis and provided OWD with 36 key recommendations to transform the department, several of which are currently under implementation. The project proved to be an enriching experience given the critical insights that we gained in a new governance domain and the meaningful manner in which we could contribute towards the transformation of the Odisha Works Department.