Agriculture is one of the most important pillars of India’s economy. Employing more than half of the country’s workforce it won’t be wrong to categorize it as the breadwinning sector of the country.

The same holds true in the state of Odisha as well. According to 2017-18 data from Annual Activity Report of Department of Agriculture and Farmers’ Empowerment, more than 60% of Odisha’s total workforce is engaged in agriculture. However, close to 92% of the total farmers own less than 2 hectares of land. The farmers in the state depend heavily on the government for support during the cropping season. This includes subsidies on inputs such as seeds, fertilizers, insurance, interest subvention on loans and procurement of produce. It is thus crucial for the state government to provide timely support to its farmers.

Over the years, while the Department of Agriculture and Farmers’ Empowerment (DAFE), Government of Odisha has taken multiple steps for farmer, most of these efforts continue to be made in silos. The nature of agriculture is such that it is affected by disparate but inter-related factors such as weather, soil, seed, fertilizers, pests, irrigation and insurance, to name a few. A policymaker in the Department of Agriculture has to make decisions keeping all these factors in mind, while also accounting for regional variation in topography, weather, availability of resources like water for irrigation, soil health, infrastructure, etc.

Absent a mechanism to collect data on all the above factors that have a bearing on agricultural productivity and analyse it, policymakers will continue to make suboptimal choices.

To mitigate this challenge, in 2017, the state embarked on a project to:

• Improve the quality of data in existing systems

To drive this project called Analytics for Decision making and Policy Transformation, or ADAPT, the Department partnered with the Bill and Melinda Gates Foundation (BMGF) and Samagra. ADAPT aims to enhance the prosperity of farmers, particularly those with small holdings, and drive inclusive agricultural transformation through evidence-based decision making at all levels of government.

A comprehensive framework as shown in the image below has been designed for the implementation of ADAPT. The Decision Support System (DSS) forms the core of the framework, bringing together data from multiple systems within and outside the department. The data housed in the DSS helps the department make decisions related to key operational areas. What does this mean in real terms? 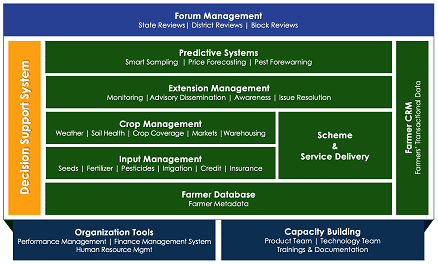 DAFE has to ensure the supply of seeds, fertilizers, pesticides, credit and insurance to farmers, through multiple divisions and Public Sector Undertakings (PSUs). Since the government provides lot of subsidies on the inputs, the farmers are heavily dependent on the supply by government agencies. To avoid any agrarian distress during the season, it is critical to supply these inputs on time across the state. Earlier, the visibility of these datasets used to be with concerned divisions and PSUs of the department only. With the integration of the datasets related to supply chains on the DSS, the department is able to monitor the key indicators on a weekly basis and take timely corrective action to avoid any delays and shortages.

The DSS also facilitates precision monitoring of situations such as rainfall deficit and pest attacks, which adversely affect agriculture production and livelihood of farmers. When calamities strike, the department can quickly make decisions on the type of seeds to be promoted, and procurement and supply of pesticides. In 2019 Kharif season, DSS helped in mitigating the consequences of a delayed monsoon by empowering the government to make important decisions related to seed supply and consumption.

DAFE runs multiple schemes which in essence handhold farmers to imbibe more effective ways of farming. Officials provide support all activities from sowing to harvesting, including free supplies of inputs. Previously, on-ground delivery of such schemes used to be monitored on paper. This meant that state level officers would seldom have visibility on the performance of schemes across the state, at a macro level. One of the modules in DSS digitizes the data reported by officials with respect to scheme implementation. As all key indicators on schemes across the state have been digitized, they are now reviewed on monthly basis at the district and state level.

DSS will soon also enable the real-time capturing of scheme data at the farmer level to improve transparency in beneficiary selection. This will also ensure agriculture extension officers are providing the right benefits to right beneficiary farmers in timely manner.